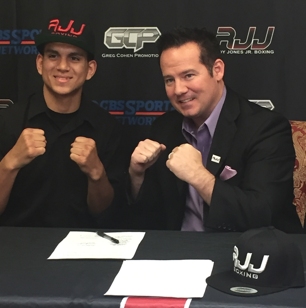 Veltre said, “I did my research on Moreno, and knowing the amateur landscape very well, easily concluded that he would make an excellent addition to Roy’s promotion. Randy Moreno represents all the things that Roy and I are trying to accomplish with our business: giving young, promising and accountable athletes a stable platform where they can build their record. Ultimately, a place where they can make a run at a championship career. I am just as devoted to the future of boxing as Roy, and we both agree that Moreno is not only RJJ material, but very well may serve as our first amateur-to-pro-to-champion success story.”

Jones, co-founder and owner of the Fight Academy, is one of the greatest boxing champions in history. He formed the Fight Academy and his promotion to further his commitment to boxing, while giving rise to a new generation of boxing professionals.

“I remember when I made the switch from amateur to pro, and how it still stands as one of the most exciting days of my life,” said Jones, “Moments like this are exactly why I created my boxing business with Keith Veltre. This is why we are so dedicated to giving these young athletes a professional, organized promotion where their talents can be realized. Congratulations Randy and welcome to the RJJ family.”

Moreno, 19, has an amateur record of 48-6. He ran a stellar amateur career racking up victories over respected opponents throughout past five years. Moreno won the Ringside World Championship (2008) and was the winner of the Gene Lewis Tournament (2014). He also placed third and fourth in the 2015 Olympic qualifiers in Memphis and Philadelphia, respectively. He is a 2014 graduate of Liberty High School in Las Vegas, where he lives with his parents, Dora and Miguel Moreno, his older brother, Michael, and his younger sister, Jacey. He trains full-time out of Gil Martinez Elite Boxing and now represents the Roy Jones Jr. Fight Academy as its latest pro boxer and rising star.

“Today I’m more excited than anything, and happy that Roy Jones Jr. is giving me this opportunity to showcase the skills that God has blessed me with,” said Moreno. “I want to show everyone at RJJ Promotions what Coach Martinez has taught me through the years. He’s not only made me the fighter I am, but also the man I’ve become. Coach has been a father figure to me, and the whole team has become my family. Now, with Roy in my corner, along with Bryan Lindsey, Gil Martinez, Jen Wenk and Las Vegas Elite Boxing, I’m ready to kick off my pro career.”

Las Vegas Boxing Coach Gil Martinez started training Moreno when he was just 14 years old. He coached him throughout his amateur career and over the last five years has primed him for his eventual pro-career.

“There is no doubt in my mind that Randy Moreno is going to be a world champion one day,” said Martinez. “I’m very proud of Randy. He is a loyal, hardworking and highly talented athlete. I see a lot of myself in Randy and think of him like a son. So, today is a dream come true for both of us. To be working with Roy, one of the all time greatest, is a blessing. My thanks go out to Guy Taylor, Keith Veltre, Lisa Veltre, Jennifer Zarley and especially the Champ for believing in Randy. On March 20, everyone is going to see what Randy Moreno is all about!!”

Jen Wenk, APR, and Bryan Lindsey, principals of STAR Public Relations, served as the exclusive brokers for the multi-year deal between Roy Jones Jr. Boxing Promotions and Randy Moreno. STAR is the Agency of Record for Moreno, with Martinez, Lindsey and Wenk functioning as Moreno’s senior advisors.